The Women in AV had another amazing year at InfoComm13 and we saw record numbers again for our sold-out luncheon and reception.  In fact, the reception was so hugely popular, we actually maxed out the capacity of our space and people were spilling outside into the lobby area!  As always, we are so grateful to our partners and sponsors for making everything possible for the Women in AV and their support is truly a testament to how much our industry welcomes and encourages women to pursue a career in AV.

It is not hard to be hugely positive about WAVE when you think about all we do together and the amazing success we have created over the past two years.  Just at InfoComm13, Chair Theresa Hahn launched our WAVE Local Chapters Initiative that will kick off over the remainder of 2013.  This opportunity will create regional and local networking and mentoring opportunities to meet women on a more frequent basis.  If you are interested in getting involved and learning more about the program, contact Theresa at womeninav@gmail.com.  And, stay tuned for InfoComm’s AV Week in October 2013, where the leaders of chapters will introduce the Local Chapter Handbook so you can start a chapter of your own!

With all that said, I’d be lying if I said there haven’t been challenges and struggles along the way.  The fact that WAVE exists is because we represent less than 20% of our industry and women can often feel alone and isolated over the course of their career.  Whether you are a man or woman, look around the next time you are in a staff meeting, training, or at a conference. Do you notice there are typically one or two women for every five to six men you see?

So, as much as I want us to focus on the positive and continually look to all we have and will achieve, it would be a disservice and frankly a lie, if we didn’t also tackle the very difficult struggles we as women, and, an industry are facing in how to support women taking on more leadership roles and getting involved.  As well as, the image and message we send out there about how women can expect to be treated when they come to our trade.

As the founder of Women in AV, I personally have had two separate occasions where men have tried to get me fired from my job or turn me into one of our associations with complaints.

The first one filed a complaint with my company because I called him out for his misogynistic language trying to disparage and defame rAVe Pubs female staff and then WAVE in his publication.  The second one I repeatedly asked in private, and, then publicly when that didn’t work, to please back off of WAVE — as it was making me entirely uncomfortable.  This person then tried to turn me into one of our trade associations because of my “demands”.

Neither situation went anywhere because — it’s RIDICULOUS.  But, each instance was incredibly stressful, lasted for over a month, and demonstrated the extent to which some will try to silence a woman when she stands up for other women and herself.  It is part of the “job” I signed up for when I founded WAVE.

However, I can’t imagine nor want to consider how many other women may have or will encounter a similar type of situation.  I take it as my personal responsibility the way I respond to these situations as to how a WAVE is treated.  It is a reflection of every woman in our industry and what they may expect to encounter.

You may know of the term “boothbabes”.  In short, it is a model that has historically been hired for a tradeshow to dress provocatively to draw guys in to generate sales.  We all know this was very common practice and has become increasingly controversial as to whether these practices inhibit women from being taken seriously.  This also extends to our advertisements and other print or social media.

This is a very serious issue and one I think we tend to ignore.  Until, something egregious comes across our radar and we are forced to address it.  Such was the case recently, when a fellow WAVE brought to my attention an advertisement she had come across in a August 2013 edition of an industry publication.  Now, think about it. Here is a female Gold Crestron programmer in AV reading a publication in which she is excited to see all the newest updates on products in our industry.  And, this is what she flips to: 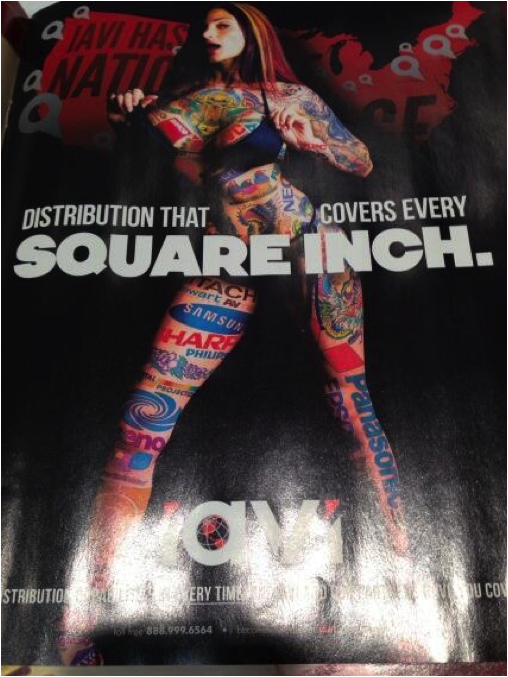 Let me just say.  My intention in bringing up this kind of stuff is never to want someone to end up in “AV Purgatory.”  We all have been in the place before where we thought, “this sounds like a great idea” OR truly measured and determined the market share we’ll  gain far outweighs any type of backlash it may receive.  Fair enough.  I can respect either of those philosophies.  As long as you own it.

And, I can say that I reached out to IAVI and they immediately returned my call the next morning.  We had a respectful conversation and I appreciated the opportunity to share my concerns, as well, I hope and appreciate the opportunity to hear where they were coming from in terms of their concept. They distribute outside FL — got it.

And, that is what I don’t really understand.  The idea is to sell and show the breadth and depth of IAVI’s distribution.  Totally cool and I even really like the catch phrase. And, when I first saw the ad, I immediately went to their website to get some background.  I can say I was incredibly impressed with the number of manufacturers they represent and their company.  That is where it gets confusing for me.

Why would someone need to bring in a woman who is so obviously sexualized to, essentially downgrade the professional and extensive reach of their company.  Why, does it seem like a good idea to trade off all that you offer customers for a dirty “peep show”?

Let alone as I have said before.  Why is it, if you can’t hang this up in your office without a visit from HR — is it acceptable to put in a trade magazine or on a show floor?  Where is the review process?

And, let’s not jump to conclusions. It may have very well been a woman who approved this.  Regardless, why are we still at a place where this is message we want to portray about women, generally speaking?  And, what about the publishers who approve of running this type of “ad”?

Obviously, as a woman I am more sensitive to this than most men.  But, I am heartened to see more and more men raising their voices against the lame excuse “sex sells”.  It not only lowers the bar for our entire industry, but, it is now at the point where it is widely questioned what is wrong with your products or services if you need to take it to these types of extreme measures.

And, this is not only the time I have seen it — or the last I am sure.  Here are some reputable and award-winning companies’ photos from InfoComm13.  Can we do better? 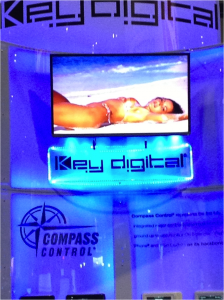 Again, my purpose is to raise awareness of the discomfort and discouragement this creates for woman so we can do better and move on.  That said, for anyone who will continue to downplay and repeat offend like CEA’s Gary Shapiro in 2012 and 2013.  Well… you can expect we will  continue to raise it every time it comes up.

Women are not Tire Treads for anyone to ride on when selling a product.